Interview with Koen Marquering, Manager of the United Nations Office on Drugs and Crime Criminal Justice Program in Central Asia.

Q: What is the current situation with trafficking in persons in Central Asia?

A: As part of our mandate, the United Nations Office on Drugs and Crime (UNODC) publishes a Global Report on Trafficking in Persons. We do this every two years. The latest report, which was released in 2016, showed that trafficking in persons is a global phenomenon with more than five hundred different trafficking flows identified all over the world. In Western Europe, victims were identified from 137 different countries.

More than 50 percent of all victims are women and girls, mostly they are sexually exploited. Almost a third of the victims are children and adolescents.

This is a worrying trend, which tells us that we must focus our preventive work on youth and raise their awareness. This is crucial in Central Asia where we have very young populations. In Uzbekistan, UNODC recently partnered with a leading NGO Istiqbolli Avlod to organize a summer camp for youth, which focused on promoting volunteerism and youth leadership on social issues, including prevention of trafficking in persons.

In Kyrgyzstan, we worked with the State Agency for Youth, Physical Education and Sports on a major youth forum at the Issyk Kul lake this summer. Now we are getting ready to launch a nationwide public awareness raising campaign “100 days against trafficking in persons” in Kyrgyzstan. This campaign, which is largely youth-led this year, will go all around the country to talk to people about the risks of becoming a human trafficking victim.

The situation with trafficking in persons in Central Asia is not straightforward due to a tradition of intense migration flows. In search of work and a better life, people leave their communities to move to bigger cities, or they leave their country to try their luck abroad. Disconnected from their families with little income they become vulnerable to exploitation and can become victims of human trafficking.

The UNODC Global Report on Trafficking in Persons found that in Central Asia most victims are men and forced labor is the most common form of exploitation.

Q: What does UNODC do to support Central Asian countries in their efforts to counter trafficking in persons?

All Central Asian countries have ratified the UN Convention Against Transnational Organized Crime and related protocols to prevent, suppress and punish trafficking in persons and smuggling of migrants. UNODC assists the countries in the region with their implementation of these international standards.

This requires a comprehensive, participatory and inclusive approach, which brings together governments and civil society around a range of issues. First, legislation needs to be in place to protect victims and prosecute traffickers. Recently, we published an analysis of Turkmenistan’s legislation to combat human trafficking. In Kyrgyzstan, we actively promote judicial reform, which entails the adoption and implementation of new criminal legislation, including provisions related to trafficking in persons.

Second, UNODC supports strategic planning of efforts to counter trafficking in persons. Within the framework of national action plans that are being implemented in various Central Asian countries, such as Kyrgyzstan, Tajikistan and Turkmenistan, we are working to strengthen interdepartmental and international cooperation. Following the adoption of a new Government Program to address trafficking in persons in Kyrgyzstan in 2017, this year we have supported the creation of anti-human trafficking coordination committees in each province. Hopefully, this will help to translate national level priorities into concrete action at the local level, where people are most vulnerable.

Q: Trafficking in persons is a hidden crime, which is often not reported to the police. What can be done to prevent impunity for this crime in Central Asia?

A: In Uzbekistan, courts annually consider approximately 300-400 or more criminal cases related to trafficking in persons. In other countries of the region, the number of criminal cases is much lower.

Investigating human trafficking is not easy. Success depends on many factors, in particular on victims themselves. Often, victims do not feel safe and are reluctant to go to the police.

Victims of human trafficking may well suffer from post-traumatic stress, depression or anxiety.   Referral and support mechanisms are needed to help them get back on their feet. Without this, how can they be expected to report the crime to the police and testify in court?

It is also necessary to strengthen the capacity of the police to prevent, detect and respond to human trafficking. As part of our programs in Central Asia, this is exactly what we are doing.

In Kyrgyzstan and Turkmenistan, UNODC has produced training manuals to build the skills of law enforcement officers, prosecutors and judges to investigate, prosecute and adjudicate trafficking cases. In Uzbekistan, we recently launched a training film called "Victims, not villains", which emphasizes the role of prosecutors and judges in ensuring that trials do not damage the rights, dignity, physical and psychological well-being of victims of trafficking.

Q: How do countries of origin and destination cooperate on human trafficking cases?

Trafficking in persons is a form of transnational crime, meaning that it often involves more than one country and different jurisdictions. Countries of origin, transit and destination need to work together to protect and support victims and to ensure traffickers are convicted.

In Kyrgyzstan, UNODC recently brought together prosecutors and other representatives of authorized bodies responsible for international cooperation to discuss the main challenges in this area. This dialogue platform gave Kyrgyz authorities an opportunity to interact with their counterparts from Kazakhstan, Tajikistan, Uzbekistan, the Russian Federation and Turkey about the provision of mutual legal assistance during the investigation and prosecution of trafficking cases. We hope to support more specific training on the preparation of mutual legal assistance requests and facilitate improved bilateral cooperation with destination countries during the upcoming period.

Human trafficking is a lucrative crime. The same goes for smuggling of migrants. For the first time UNODC this year published a Global Study on the Smuggling of Migrants, which concluded that migrant smuggling occurs in all regions of the world and generates an income for smugglers of up to US$7 billion.

More research on this issues is needed in Central Asia, which until now mostly seems to function as a transit area for irregular migration and migrant smuggling from South, South-West and East Asia to Europe.

Within Central Asia, irregular migration status mainly results from overstaying, the failure to register as a temporary resident or unauthorized employment, rather than from irregular movement across national borders. Still, it is possible that people who do not possess valid travel documents, or citizens of countries,  such as Uzbekistan and Turkmenistan, who may need a visa to travel, migrate irregularly within the region. Kazakhstan and in particular the Russian Federation are the main destinations for these migrants.

Q: What are the main achievements of your work in this area?

A: An important component of our work is the provision of training to police officers and other criminal justice practitioners to develop skills to conduct investigations and prosecute human trafficking. We are engaged in such capacity development in Kyrgyzstan, Uzbekistan and Turkmenistan. Soon we plan to launch a similar initiative in Tajikistan.

This summer we brought together a group of investigators from all regions of Kyrgyzstan. They had heated debates on the challenges they face. Sure, one training cannot be expected to change the way the system works. However, we have some indications that police are now initiating several new investigations into human trafficking cases. The Ministry of Interior’s Criminal Investigations Service has shown commitment to strengthen its response to human trafficking.

With our support, the Government in Kyrgyzstan this year introduced a new system for data collection on gender-based violence and human trafficking. This will allow for better monitoring of the situation and development of targeted measures to prevent and respond to trafficking in persons. There are several important innovations in the new reporting formats. For example, government agencies will begin to collect data on various forms of exploitation to which victims of trafficking have been exposed.

The “100 days against trafficking in persons” campaign is due to start on 10 September in Kyrgyzstan. Such nationwide campaigns, which reach people at the community level, are needed in all Central Asian countries. Related awareness raising events will also focus on the need to eradicate such practices, as early marriage, forced marriage and bride kidnapping.

I would like to invite everyone to join this initiative so that we can strengthen cooperation, work together and seek effective solutions to prevent human trafficking in all countries of Central Asia. 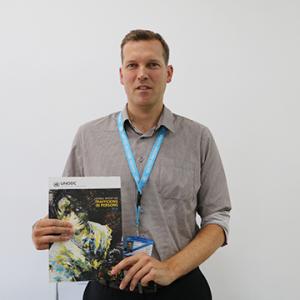