Ending gender-based violence to build a sustainable future for all

Evidence shows that gender-based violence remains one of the world’s most widespread, persistent and devastating human rights violations.  More than 150 countries have adopted laws on gender-based and domestic violence. However, often the weak enforcement of these laws is limiting women and girls’ access to safety and justice, and achievement of their full potential. Additional efforts are needed to adequately prevent and respond to violence against women and girls, protect the survivors and end the culture of impunity.

An estimated 736 million women in the world aged 15 and over —almost every third—have been subjected to intimate partner violence, non-partner sexual violence, or both at least once in their life. There is no society in the world untouched by gender-based violence. It occurs in every country, irrespective of age, ethnicity, culture or religion. Deeply rooted patriarchal norms and values can create grounds for unfavourable behaviour, including but not limited to violence against women and girls. The countries of Central Asia are not an exception to this.

Every sixth woman aged 18 to 59 in Turkmenistan who has ever been married or was in a relationship experienced some form of violence – physical, sexual or psychological – as evidenced in the first-ever national survey on the health and status of a woman in the family, supported by UNFPA.

It is often the case that women justify violence against them due to traditional gender roles of women in a family and do not report cases of violence to the competent authorities due to also lack of information and knowledge on their rights and freedoms. The 2019 Turkmenistan Multiple Indicator Cluster Survey confirmed that women who experience domestic violence rarely reach out for help, a majority of women (58%) accept and justify intimate partner violence.

Violence against women and girls is preventable. Removing structural barriers to women’s economic empowerment, promoting education and employment opportunities play a huge role in the efforts to prevent GBV through increasing the independence and self-realization of women's potential.

Turkmenistan has made progress in recent years by adopting the National Action Plan on Gender Equality 2021-2025 (NAPGE), which outlines national objectives on promoting gender equality, including prevention and response to gender-based violence.

Turkmenistan ratified the Convention on the Elimination of All Forms of Discrimination against Women (CEDAW) in 1997 and signed its Optional Protocol in 2009. Every four years the Government of Turkmenistan provides the periodic reports to the CEDAW Committee, which issues recommendations aimed at further improvement and acceleration of the implementation of this international tool obliging to guarantee women’s rights and tackle discrimination against women.

It is crucial that the Government continuous reviewing and further strengthening of the existing legislative framework, in line with international standards and recommendations of CEDAW. UNDP and other UN Agencies in Turkmenistan stand ready to develop strong and well-coordinated partnerships to support the Government in strengthening policy responses and ensuring adequate enforcement to end a culture of impunity.

Together with other partners we focus on promoting Multi-stakeholder Approach to Gender Mainstreaming Issues in Turkmenistan in line with NAPGE and recommendations of CEDAW. We work on strengthening the system of multisectoral response based on providing a coordinated social support to the victims of gender-based violence, including health, psycho, social and police sectors of the Central Asian countries. These joint efforts are carried out in the framework of the Spotlight Initiative Regional Programme, which aims at ending sexual and gender-based violence and harmful practices in Central Asia and Afghanistan.

Education and increased employment opportunities can play a central role in economic independence and self-realization of women's potential to become less vulnerable to gender-based violence. Through joint efforts of UNDP and the Ministry of Labor and Social Protection of the Population of Turkmenistan we established the Information and Education centres in six pilot cities of the country to increase knowledge and promote employment for young people, including women and people with disabilities.

It is also vital to give women equal access to technology and the internet. Recently, UNDP, together with the US Embassy in Turkmenistan, organized the first ever Hackathon for women and girls in the country, which clearly demonstrated a huge potential among young people, in particular among girls who are already at a decent professional level and eager to further develop their education for the benefit of the country. Unfortunately, this cannot be achieved without state support and stimulation of ICT education in line with the recommendations of the UN treaty bodies.

As gender-based and domestic violence is deeply rooted in societies’ social norms, it is essential to work on transforming gender norms and power relations from within the community. Thus, effective strategies for the prevention of gender-based violence must include raising public’s awareness, empowering women economically and promoting women’s active participation in politics and public life to ensure overall growth and achieve meaningful progress.

We need to acknowledge the socio-economic and political role of women in the Central Asia, who can actively participate in maintaining regional peace and security and influence and lead towards transformational social changes necessary to achieve the Sustainable Development Goals.

The Central Asian Women’s Dialogue (CAWD) is our main partner in the efforts to accelerate gender equality and women’s economic empowerment. This important platform, initiated by the United Nations Regional Center for Preventive Diplomacy for Central Asia (UNRCCA) and the UNDP Regional Office for Europe and the CIS, is essential for establishing an inclusive dialogue on promoting gender equality, within the efforts to maintain peace and stability in the region, as well as for developing sustainable solutions for advancement of women’s rights and empowerment of women and girls, which is the key to prevent gender-based violence in the region. We are happy to witness active leadership of this important platform by Turkmenistan under their chairmanship this year.

The continuous collection of reliable and valid data on gender-based and domestic violence is vital – as it creates the basis for a tangible and successful response and protection of victims.

We congratulate the government with the release of the first ever national UNFPA-supported survey “Health and Status of a Woman in the Family in Turkmenistan”. The Women Health Survey as well as the MICS conducted by the Government of Turkmenistan and UNICEF with the support of UNFPA in 2019 serves as a valuable source for addressing women’s challenges and demonstrates Turkmenistan’s commitment to strengthen its data systems for planning and informing the corresponding policy actions to protect women.

The more decision makers and practitioners know about gender-based violence, its prevalence and patterns, and about the strengths and weaknesses of the policy and response frameworks - the more tailor-made, efficient and effective strategies to end gender-based violence can be developed.

To support the Government in strengthening the national data systems, UNDP will continue working with the State Statistics Committee of Turkmenistan on enhancing its capacity for quality statistical reporting to track and measure progress toward achievement of the SDGs in Turkmenistan.

Violence against women and girls is a fundamental violation of human rights with far-reaching negative consequences on development. Evidence shows that unequal participation of women in society and the economy affects them and society as a whole. The exclusion of women slows overall growth and makes it impossible for countries to achieve meaningful progress.  On the other hand, reducing violence and ensuring full and equal rights of women and men, both in law and in practice, helps accelerate achieving of multiple Sustainable Development Goals.

The United Nations, as outlined in Agenda 2030, takes a global approach to end poverty, protect the planet and ensure peace and prosperity. The 17 Sustainable Development Goals emphasize the importance of the rule of law and the creation of strong, accountable institutions that govern peaceful, stable and inclusive societies and ensure the inclusion of women in all spheres of development.

The 16 Days of Activism against Gender-Based Violence is an annual international campaign that kicks off on 25 November, the International Day for the Elimination of Violence against Women, and runs until 10 December, Human Rights Day aiming to raise awareness, mobilize advocacy and inspire action to end eliminating violence against women and girls around the world.

As the UN System globally, and in Turkmenistan, kick-started this important campaign I would like to call to all our national stakeholders, development partners and all individuals to redouble our efforts to challenge behaviors that normalize violence, raise awareness and co-create lasting solutions a in addressing gender-based violence.   Only together we can speed up progress on gender equality and women’s empowerment in the country and beyond. Only together we will build a future free of injustice, discrimination and violence. 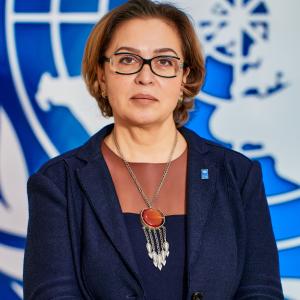