Vermicomposting - A Source of Alternative Income for Women in Agriculture

Lebap region of Turkmenistan is the longest in the country. 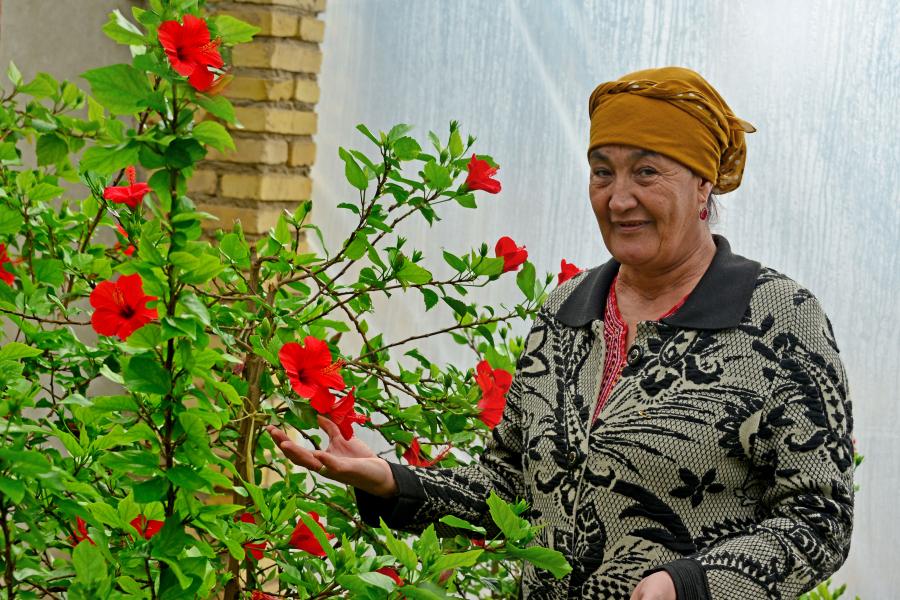 The largest river in Central Asia, the Amu Darya, flows through its territory from south to north at a distance of 830 kilometers. Since ancient times, oases have been located along the shores of this main waterway of the region, where various crops have been successfully cultivated. However, in the face of climate change, the abundance of water resources is not a sufficient condition for the prosperity and improvement of the livelihoods of local communities.

Temperature rise is a direct cause of environmental degradation, extreme weather conditions, and the loss of biological or economic land productivity reduce the welfare of the local population. In addition, the changing landscape of the economy contributes to the fact that a significant part of the population is forced to look for more effective solutions for the development of agriculture and alternative sources of income. 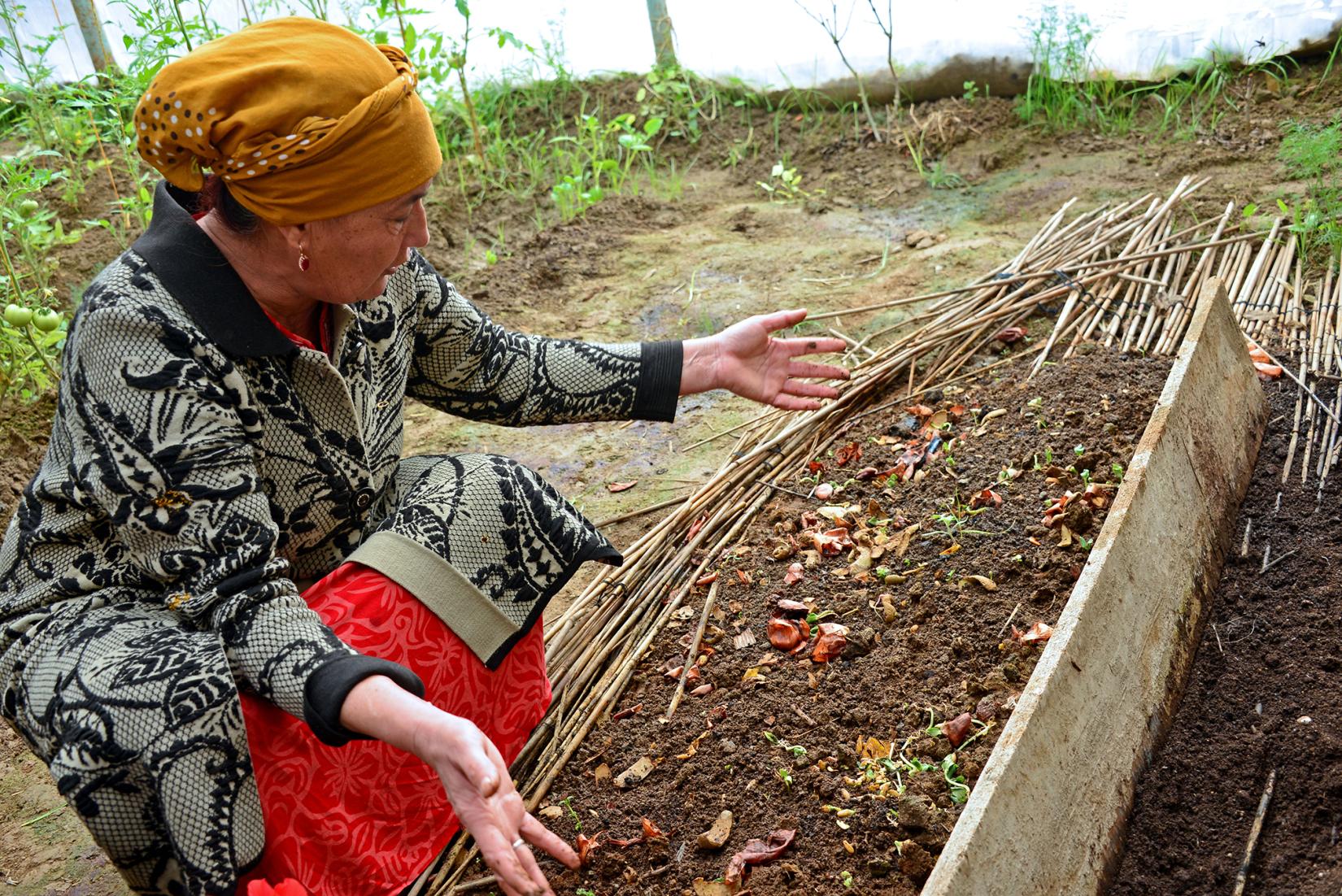 Often, the main burden of earning and finding alternative sources of income for the family falls on women - heads of households, who are the most vulnerable group of the rural population to the effects of climate change. A joint project of UNDP and the Ministry of Agriculture and Environment Protection of Turkmenistan, funded by the Global Environment Facility, provides advisory support to rural women in the pilot regions of the project to maintain financial stability and empower women by enhancing their potential, introducing successful practices and demonstrating ways to generate alternative sources of income.

For several women in the Daikhan association “Vatan” and “Parakhat” of the Lebap province, the production of vermicompost (biohumus) has become the main activity that ensures the family's income and its well-being.

Gulbakhar was born and raised in the village of Zergomen of the Lebap province. She has two daughters and one son. All his life, Gulbakhar worked on the collective farm in various positions related to agriculture. However, after retiring, Gulbahar had to look for a new occupation in order to provide her household with income. Gulbahar began to grow flowers, lemons, potatoes and tomatoes in her garden. 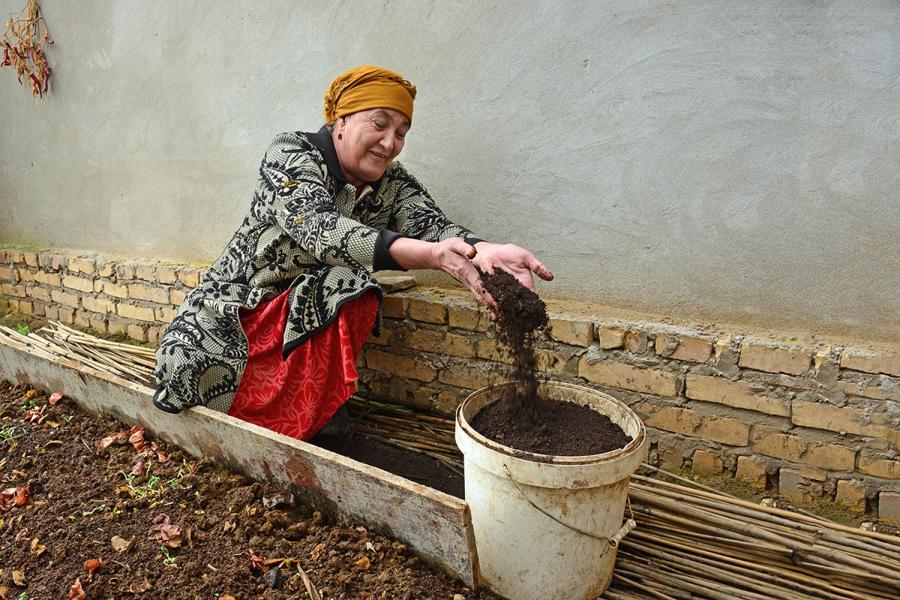 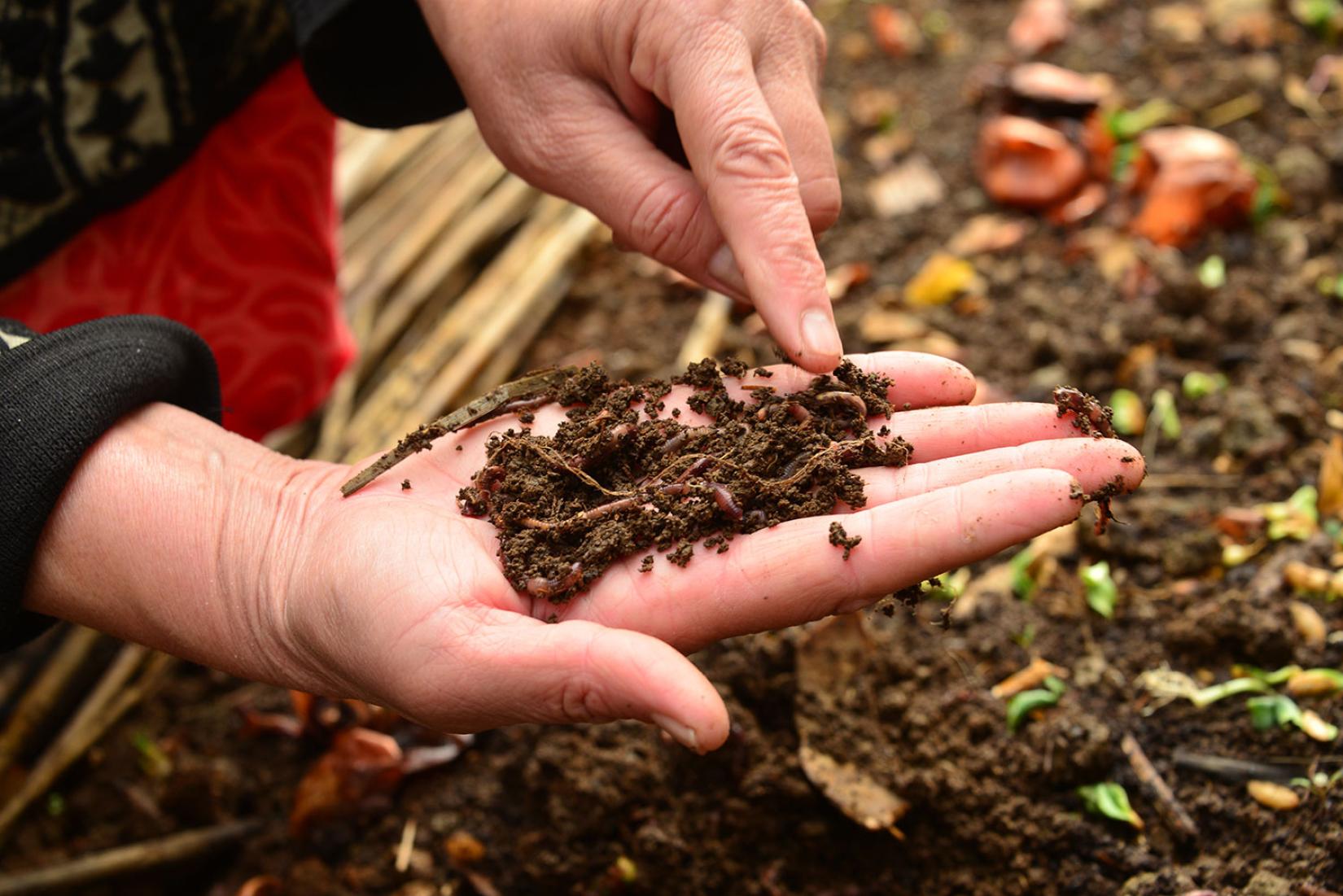 “Two years ago, I have built a small greenhouse measuring 8x6 meters. I have harvested enough for my family and some for sale. I planted bell peppers and tomatoes, and the neighbors came to me to try them, because they said that they had the best taste, because I don’t use mineral fertilizers,” says Gulbahar. “However, the soil became less and less fertile, and I have to use decayed manure, which attracts insects and causes a lot of weeds to appear. To deal with them, I have to use various chemicals. It seemed to me that the taste of vegetables changed from this, and therefore I was looking for some means to make my production efficient and environmentally friendly.”

In 2019, Gulbahar undertook a series of UNDP trainings on finding ​​alternative sources of income and supporting climate-resilient economic activity of local communities. She was included in the initiative group of women receiving regular free agro-consultations on the organization of production of vermicompost on the basis of the agro-information centers of the project. As an activist, Gulbahar received a bag of California worms from the project and today she has established her own production in her home garden. Gulbahar is the elder of the Vatan farmers’ association and, by her example, she shows young girls and all residents what green production is, what advantages it has and how to realize its potential in finding sources of income. 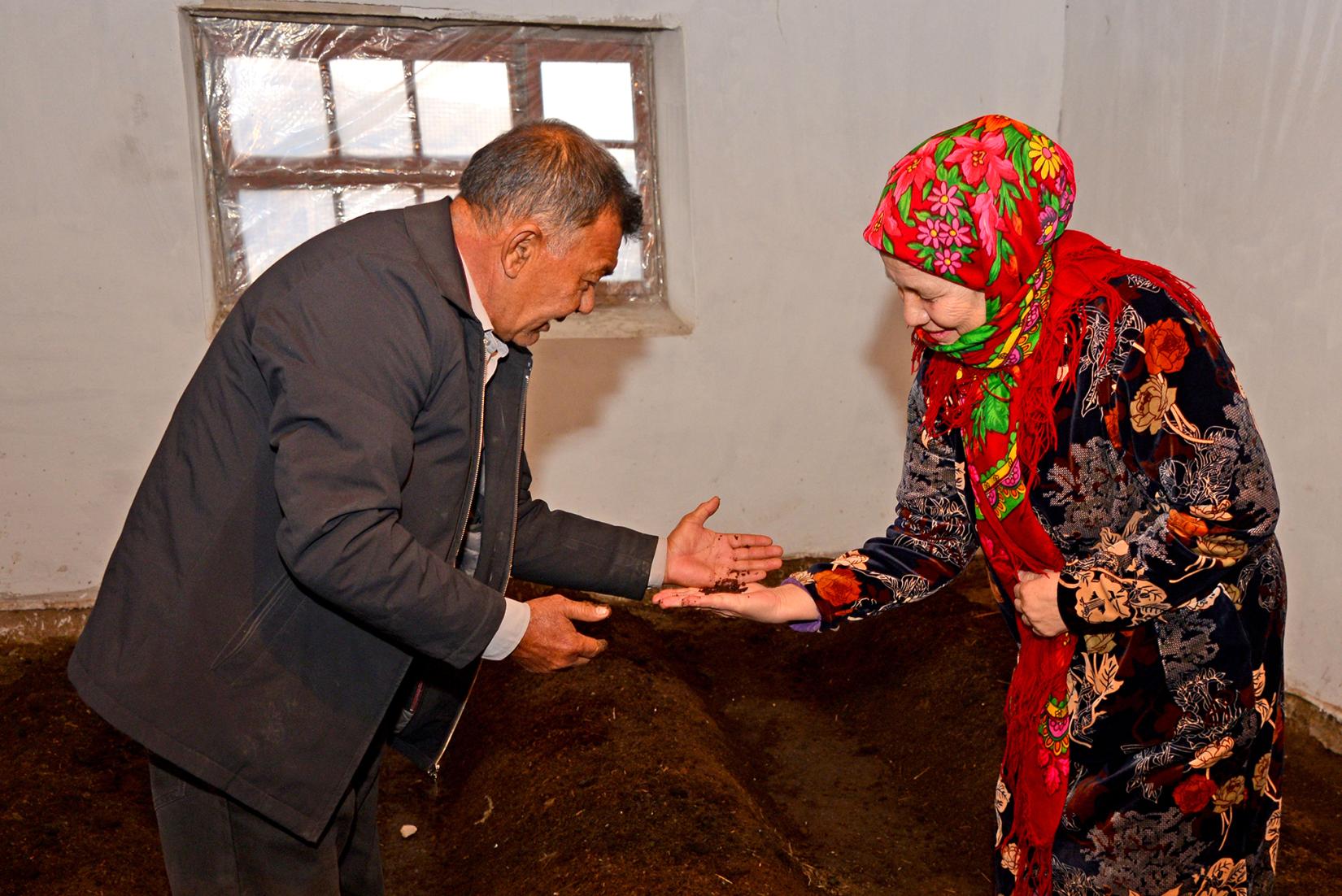 “I used to buy vermicompost which was produced abroad. But it was very expensive for me. Then I undertook UNDP trainings and learned about it more. However, I still lacked some knowledge about production of vermicompost. Thanks to the project support, I filled in this knowledge gap and now produce vermicompost myself. I am very satisfied with the results that I got,” said Gulbahar.

For the production of vermicompost, a special flooring is prepared, providing air exchange, which is divided into 2 parts. California worms are first placed on one side of this flooring, where the substrate is poured in advance (a mixture of manure, green residues and some solid waste). After the worms pass the entire substrate through themselves, they move to the other side, where a new substrate is prepared. It is very important to monitor the humidity of the substrate, its temperature and pH. As a result of the life of the red California worm (Eisenia fetida), a friable, odorless and mineral-enriched product is obtained. One spoon of the vermicompost is given to each plant after a certain time, for example, with a frequency of every 2-3 weeks.

“Now I have received vermicompost, which I use for my farm and this allowed me to increase productivity and save money on mineral fertilizers. I have already sold some tomatoes, because I received some surplus of the harvest. I also sold several packages of vermicompost to neighbors at 4 manat per kg and distributed to my relatives. Now I have planted Iranian persimmons and oranges,” notes Gulbahar. “I want to increase my greenhouse by 30 square meters and expand the production of vermicompost, because it will help me produce more vegetables and flowers for sale.”

Gulbahar has already received an offer from the chairman of the Vatan farmers’ association to develop a lemonarium in a demonstration greenhouse, which is currently being built as part of the grant activities of the UNDP/GEF project. She also plans to breed worms and sell them to those who wish to produce biohumus.

“Many people simply don’t know what biohumus is and generally about its existence, but if they knew, they would use it and they would also have a good harvest. I am sure that worms are of great benefit. I tried a lot of things, neither nitrogen nor phosphorus gave such a good effect. I tell everyone about what biohumus is and how to produce it. The most important thing - do not sit idle, do useful things, then there will be no quarrels and discord at home.” 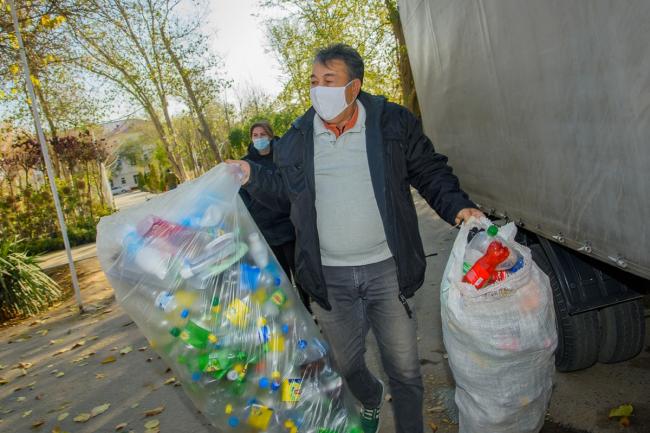 Here is how you should sort and recycle waste

Did you know that 1 person in the USA produces over 900 kg of waste every year? That’s about 2.5 kg per day. 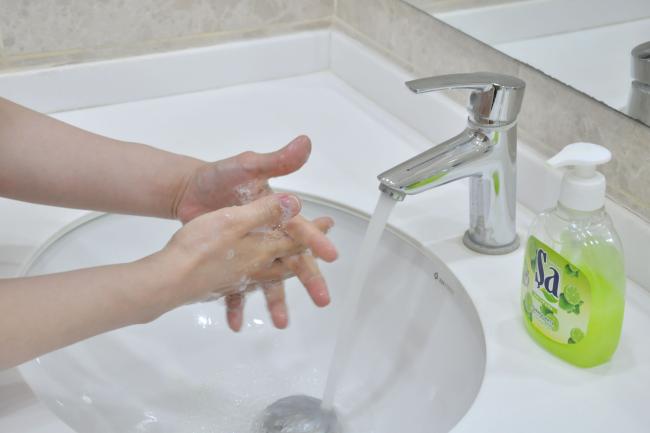 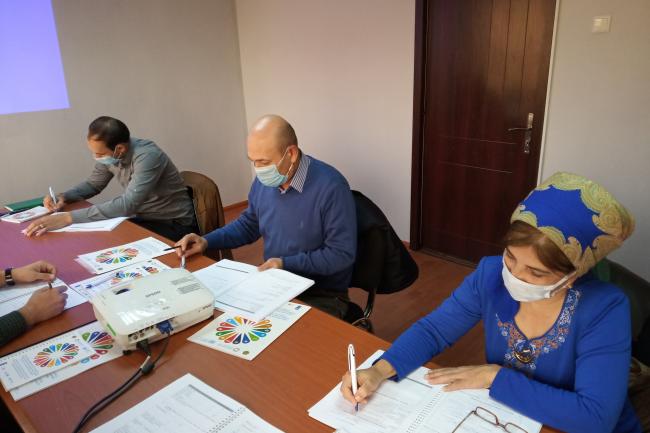 Discovering a new helping profession – a specialists of social work

In her previous job at a local bank, one of Mahri Rejepova’s responsibilities was to provide support to people who were struggling with banking.